While Brexit has already impacted the lives of British people who live in Spain, it will also affect those who have longterm plans to retire here after December 31st 2020. Here’s what UK residents hoping to retire to Spain need to know about visas, healthcare and financial requirements.

Spain has long been a popular place to retire to and many British second-home owners plan to one day change their holiday home into their main residence, not to mention those who still have intentions of buying their dream property in the country.

But although owning property in Spain gives you a practical head start on your retirement plans, it doesn’t afford you any extra legal rights in relation to moving here full time.

Spain’s well-regarded healthcare system and – in many places – cheap cost of living combine with its more general attractions (sunny climate, interesting culture, delicious food and ease of travel to the UK) to make it both attractive and affordable for British pensioners.
Under EU freedom of movement, making the move has been relatively straightforward but once the Brexit transition period ends on December 31st 2020 things are set to change.

Exactly what the rules will be for British people who want to move to Spain after January 1st 2021 we don’t yet know – it’s one of the many things that still need to be agreed before the end of the transition period (along with the small matter of a trade deal).
But as non-EU citizens, it is likely that British people will face a regime similar to that already in place for third country nationals such as Americans and Australians. And of course there are plenty of them who manage to retire to Spain so clearly it is not impossible. It is however a lot more complicated and considerably more expensive.

Here is a look at some of the key points for potential retirees in Spain; residency/visa rules, income level, healthcare and pensions.

Residency and visas
For all British people, not just retirees, there is profound uncertainty over what the rules will be on moving to Spain after January 1st 2021.
Given that the UK is ending freedom of movement for EU citizens it effectively means that freedom of movement is also ending for UK citizens in the EU. It is still possible that Spain and the UK could come to a future bilateral agreement to make it easier for their citizens to move countries after Brexit.

The good news is that who registered as residents in Spain before July 6th 2020 and are holders of a green residency certificate will hold onto their rights in Spain under the Withdrawal Agreement.

This also applies to those registering after July 6th but before December 31st 2020, although they will be issued a TIE residency card.
For those registering after Brexit and intending to retire in Spain, the rules for Brits moving to Spain are likely to be as they are for third country nationals at present, unless a bilateral agreement is reached.

The advice by the British Embassy is therefore that Brits who intend to retire in Spain make the move before the end of 2020 as the requirements will be harder (but not impossible) after then. Fortunately, the European Parliament announced in April 2019 that UK citizens won’t need a visa in order to visit the EU after Brexit, which means that the process can be started in the first 90 days since you arrive in Spain, as opposed to Americans or other thirdcountry nationals who have to apply for a visa first to get into the country.

If you’re going to Spain to retire, the best option right now for thirdcountry nationals is Spain’s non-lucrative visa. A non-lucrative visa is an authorisation that allows non-EU foreigners to stay in Spain for a period of more than 90 days without carrying out work or professional activities, by demonstrating that they have sufficient financial means for themselves and, if applicable, their family (more details in income section).
The initial visa lasts one year, the renewal lasts two and by the third renewal visa-holders will be able to apply for long-term residence which has to be renewed every five years.

After ten years of legal residence in Spain, Brits or any other thirdcountry nationals can apply for Spanish nationality, although dual nationality is only available to a handful of countries.
The advantages of a Spain’s non-lucrative visa system are that the applicant doesn’t depend on another person (usually a family member) or employer to ‘sponsor’ them.

There is also a ‘golden’ or investment residency visa for non-EU citizens in Spain who either buy a property worth at least €500,000 or have €1 million in shares in a Spanish company or €2million in public debt, as well as the financial means to support yourself and your loved ones.

Income
There’s a stereotype that British retirees in Spain are all wealthy gin-swilling “expat” types, and while these undoubtedly exist many British pensioners in the country live on very modest means.
Compared to the UK, property in Spain is cheap and this, combined with the relatively low cost of living outside the big cities, has made Spain a popular destination for those who need a stretch a small pension to make ends meet.
However getting a visa to retire to Spain requires, among other things, giving detailed financial information to prove that you will be able to independently finance your stay in Spain, be it through a pension, assets, savings etc

There is no benchmark figure provided by Spanish authorities for third-country nationals who want to live in Spain, with the consensus being that every case is judged individually and that different regions have different criteria.
But the general rule is that third-country nationals are required to prove they have more money and assets than EU citizens in Spain if they’re not working, hence why the British Embassy is encouraging Brits who aren’t registered in Spain to do so as soon as possible (more favourable conditions under Withdrawal Agreement). 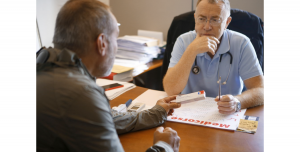 Again, there isn’t a specific figure mentioned by Spanish authorities for non-EU citizens but several migration agencies specialising in non-lucrative visas for Spain speak of a ballpark figure of between €2,100 and €2,500 per month, with €500 more per dependent.
So while it is true that plenty of Americans, Australians and other third country nationals do retire to Spain, they tend to be people who are more well off.
Healthcare costs need to be considered if you intend to retire in Spain.

Healthcare
With apologies to any retirees who are currently fit as a fiddle healthcare is something that you need to consider as you get older.
At present the British government operates a scheme called S1 under which British pensioners who live in Spain register with the Spanish healthcare system but the UK government reimburses their medical costs.
According to reports the UK is intending to end S1 cover after the Brexit transition period – meaning healthcare costs of British pensioners who move to Spain after December 31st will no longerbe reimbursed.
Importantly the UK is also proposing cutting social security benefits for people who move between the UK and the EU from after the transition period, although nothing has yet been agreed.
If there is no S1 or alternative scheme agreed, then British pensioners may need to have comprehensive private medical insurance which offers the same cover as Spain’s public health care system – something that can be expensive or difficult to secure for people with long-term health problems.
After the first year of residence in Spain however, Brits in Spain can apply for the “convenio especial” (special agreement), which allows under 65s to pay a monthly fee of €60 per month and over 65s €157 per month to have access to Spain’s public healthcare system.

Pensions
At present people who are paid a state pension in the UK can continue to claim it if they live in Spain and their pension will be uprated – raised in line with inflation, wage growth or price increases- every year.
For people resident in Spain before December 31st 2020, their UK pension will continue to be uprated for the rest of their lives.
For people who make the move after transition, however, there is no such guarantee at the moment that their state pension will be uprated.
Another complication is that when the UK was part of the EU someone could work for 10 years in the UK, 10 years in France and 10 years in Spain, and when they came to retire could apply for their state pension in the last country where they lived or worked, and the single claim would then be co-ordinated by that country’s authorities.

The withdrawal agreement guarantees that co-ordination for those living in the EU until the end of 2020, but for those who move to the EU after that there’s no guarantee it will continue. It will again depend on negotiations on the future relationship.
The above all applies to people who plan to move to Spain after the end of the Brexit transition period on December 31st, 2020. If you are already living here or plan to make the move bythe end of the year, your rights will be protected by the Withdrawal Agreement.

This website uses cookies to improve your experience while you navigate through the website. Out of these cookies, the cookies that are categorized as necessary are stored on your browser as they are essential for the working of basic functionalities of the website. We also use third-party cookies that help us analyze and understand how you use this website. These cookies will be stored in your browser only with your consent. You also have the option to opt-out of these cookies. But opting out of some of these cookies may have an effect on your browsing experience.
Necessary Always Enabled
Necessary cookies are absolutely essential for the website to function properly. This category only includes cookies that ensures basic functionalities and security features of the website. These cookies do not store any personal information.
Non-necessary
Any cookies that may not be particularly necessary for the website to function and is used specifically to collect user personal data via analytics, ads, other embedded contents are termed as non-necessary cookies. It is mandatory to procure user consent prior to running these cookies on your website.
SAVE & ACCEPT